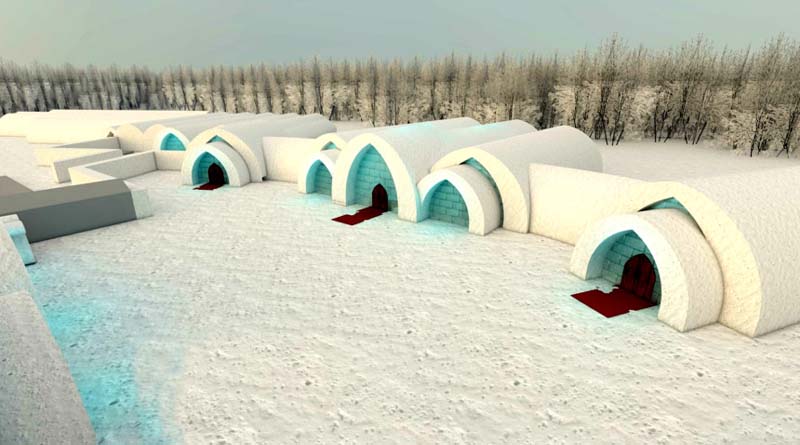 For 20 years, the Ice Hotel has been taking shape every winter in Quebec City. For this anniversary year, the establishment, which is built at a pace never seen, intends to offer a real journey in time to its visitors.

To pay homage to the Quebec City region, artists have created a work that will dress up the hotel’s Fun Zone. Games of light on ice, an enchanting forest and a door Saint-Louis, reproduced in the snow, will put the visitors’ eyes. Sculptures and books are present everywhere on the site.

Opened on January 1st 2001, the ice hotel was first built in the park of Montmorency Falls with only 11 rooms. It is located at the tourist resort Duchesnay, from 2002 to 2010, and in 2011, the hotel moved to Charlesbourg and has 36 rooms. It stayed there until 2015. The following year, it moved to the Valcartier Vacation Village and now has 44 rooms. The construction of the entire complex requires approximately 30,000 tonnes of snow and 500 tonnes of ice. The walls can be up to one meter twenty thick.

Every year, approximately 100,000 visitors discover this unique ice hotel in America. In 20 years, nearly two million visitors and some 70,000 nights warmed the walls of the Ice Hotel.

Of all the attractions that make winter truly exceptional in Quebec City, some are totally out of the ordinary. While many opt for the Petit Champlain district or the Quebec City Carnival, sometimes you just need to get out of the heart of the city to discover some really impressive places. The Ice Hotel, which attracts thousands of visitors and tourists every winter, is one of them. Once again this year, the only place in Saint-Gabriel-de-Valcartier will open its doors of ice and perhaps even earlier than usual.

Indeed, the rather special temperatures of recent times and the early cold weather we are experiencing in Quebec this year mean that infrastructure construction is really well underway. So the hotel could be ready to welcome visitors just in time for Christmas 2019.

This early opening could therefore coincide with a very special year for the place. Indeed, the Ice Hotel will celebrate its 20th anniversary in 2020.

For the occasion, visitors will be immersed in a real journey back in time, where the highlights of the hotel will be put forward.

The 20 theme suites will be winks in recent years. In addition, games of lights on ice, an enchanting forest and a reproduction of the Porte Saint-Louis will be created to pay homage to the beauty of the city of Quebec.

Although it may be that the hotel opens its doors before, the official opening of the Ice Hotel will take place on January 17th with an inauguration evening where you could see 2Frères, a Canadian folk band, in performance and a pyromusical show.

Several other events are also scheduled throughout the winter until the last weekend of the season, March 28th and 29th, 2020. These will be announced from time to time.

Why you have to go: To relive the two decades of history of the Ice Hotel and be amazed by the beauty that its original structure offers visitors.