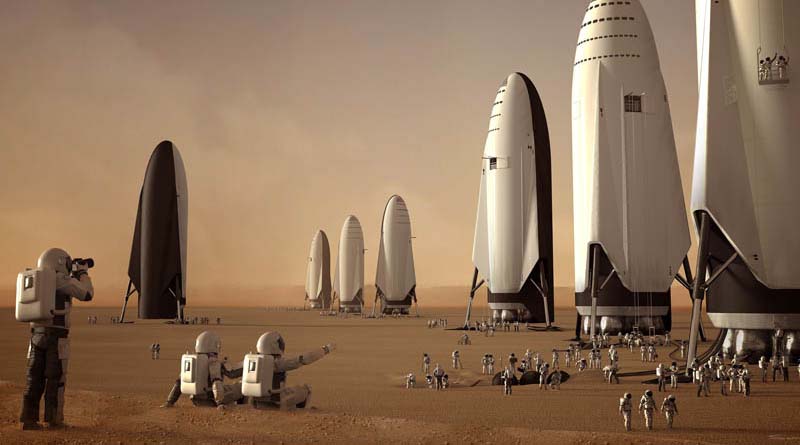 Do you want to go on a trip far? But really…VERY far? It is indeed the most distant journey that no human being has ever realized that is in question here.

The CEO of SpaceX has returned, in figures this time, on the projects of colonization of Mars. He has unveiled the prototype of its new spaceship, the Starship. This machine could take you, if you have the means and you are a little patient, on the Mars! He estimates that 1,000 takeoffs of StarShip over 20 years will be needed to establish the first city.

Elon Musk’s main goal is to send men and women to Mars. This has conditioned his career, his choices like the creation of Tesla and of course SpaceX. Today, he goes into more detail about the colonization process, its timing and what needs to be done to make it possible.

When will the first colony be built on Mars?

If until now SpaceX and Elon Musk had been relatively talkative about Mars, it was essentially to talk about the trip itself, more than the colonization project that would follow. Of course, 3D renderings were shown, but today these are the numbers that interest us. Because if the time before making Man an interplanetary hope is still far, each day brings us a little closer.

At an event organized by the US Air Force, he returned to the cost of a takeoff. He estimates that it will spend $2 million to send his Starship ship to Mars. To be able to build a complete colony on the Red Planet, it will take no less than 1,000 flights to transport all the necessary resources and teams. He believes that a period of 20 years will be necessary. If 1,000 flights in 20 years represent about one takeoff per week, it is not possible to calculate such an average. Given the movement of the planets, we must wait for a particular alignment that occurs only every two years.

Speaking of a near future, especially concerning the launching into orbit of satellites, the goal is to be able to make 1,000 takeoffs per year by Starship. With an arsenal of 100 reusable ships capable of carrying 100 tons, this would allow a total of 10 million tons of equipment sent to Space. To put figures into perspective, all of the satellites currently in orbit each year represent only 500 tonnes per year, half of which are launched by SpaceX Falcon rockets.

These figures make you dizzy and especially illustrates Elon Musk’s vision for the future. He shares it with many specialists: Between the Artemis projects to send astronauts back to the Moon by 2024, Russia’s desire to host tourists in the ISS, the basic Cino-European projects lunar, Space should be more and more visited in the coming years and SpaceX intends to carve out the lion’s share.

The prototypes are under construction

Well, with regard to the trip to Mars, even if it is a relatively close future, this flight will not take place either in the coming months. The representatives of SpaceX have indeed announced that they should initially make a first unmanned flight of the Starship, a flight that should be done in 2021.

Photo: The prototype under construction

However, things are progressing well on the launch pad in Boca Chica, Texas, where the MK1, one of the two prototypes of the future Starship, has been fully assembled. This is a 50-meter-tall machine that weighs about 200 tons empty, a pretty baby in stainless steel.

Ultimately, the device that builds SpaceX will be able to board a crew of 100 people with refueling, that goes without saying.

Engineers are currently working on a rocket that will be reusable and can return to Earth, in case some passers get homesick.

Photo: The three engines of the rocket

Elon Musk did not do things in half, quite the opposite, decided to build a second prototype (MK2) in SpaceX’s Florida facility. The goal is to create a competition between the two sites and thus improve the final design of Starship.

Some are already stamping with impatience: this is the case of Japanese billionaire Yusaku Maezawa, who has already booked his ticket for a trip around the moon. However, he will have to wait a few years before being able to buckle up.

For Elon Musk, colonizing the planet Mars is a dream he hopes to achieve in his lifetime. But this space adventure is a daunting challenge that should keep his teams busy for a few more years…

It may seem far 2030 or 2040, but when you think about it, it is in less years that the last great alien adventure, the conquest of the Moon that took place…there are already fifty years!

Where to Go During Your Winter Holidays? Are You Rather Snow or Sun?