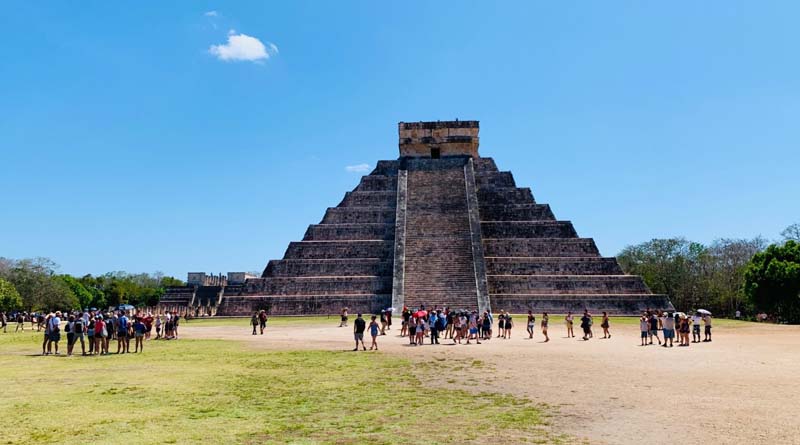 Discovering Chichen Itza – the Mysteries of the Ancient Mayan City

Chichen Itza, a pre-Columbian city built by the Mayans. It is located in the Tinum municipality in the state of Yucatán, Mexico. As a true archaeological sanctuary, it presents a multitude of varied architectures reminiscent of different eras crossed by central Mexico and the plains of North Maya. This is a site worth visiting during a stay in Mexico, especially if you are fans of architecture, archeology and ancient civilizations.

It is an impressive archaeological site located southeast of Mérida, the capital of Yucatán. During its golden years, Chichen Itza was the most important political, economic and religious center of the Mayan civilization.

It has always been thought that the presence of Mexican styles in the architecture of this site represented the direct migration or even the conquest of central Mexico, but most contemporary interpretations are rather directed towards thinking that it is the result of the cultural diffusion.

Although, unlike most archaeological sites these days, it lacks the intense color pigments that the Mayans used to decorate their temples, the markets and courtyards of Chichen Itza with its architectural beauty continue to impress domestic and foreign travelers. Another fascinating facet of the Mayans is the perfect harmony they had with nature, reflected by the special layout of the city’s buildings, built to coincide with important astronomical phenomena.

Learn more about the Mayan civilization

The city was named one of the “Seven New Wonders of the World” in 2007, after a worldwide vote via the Internet. UNESCO has included the archaeological city among the world heritage sites in 1988. These titles are well deserved, because this city is not only a site for Mayan rituals and ceremonies, but also a gallery of engravings that adorn the buildings of the city and make us fully understand the wisdom of the Mayans.

At the door of discoveries

Chichen Itza is an enigmatic place that holds mysteries and invaluable secrets. It has been proven that each temple in the city was built according to the position of the stars and planets. The castle, for example, refers to the equinoxes, when the day and the night have the same duration, and to the summer solstice, when the sun reaches its apogee on the Tropic of the Cancer. Another similar case is the Observatory, which records the cycles of the moon, which, along with the positioning of the sun, is an important indicator of the planting and harvesting seasons.

If you visit Mexico, you cannot miss the opportunity to visit this magical place, which includes exuberant vegetation, beautiful architectural treasures and invaluable knowledge of astronomy, mathematics and even acoustics. It is one of the largest indigenous settlements of all civilizations in South America and one of the best-preserved archaeological sites in Mexico. A real gift for the world that must be preserved for future generations, this site remains one of the privileged for tourists.

The main remains of Chichen Itza

Even if the civilization that built it is not as powerful as it was then, Chichen Itza still shows their know-how. On the site, there are still many vestiges of this glorious past:

Although many vestiges still remain there, their only presence did not allow to understand certain phenomena to know:

Understanding Eggs and Cholesterol: How Many Eggs Can You Eat Per Day?